A walking tour takes us to taste the individual Alt beers in five Düsseldorf home breweries. Alt is a specialty from the Düsseldorf region. Celebrities such as Gustaf Gründgens, Joseph Beuys or company boss Flick already knew to appreciate this. This fresh and very drinkable beer is brewed according to old tradition and the Rhenish way of life. Taste the difference and enjoy the blue-brushed Köbesse (beer waiters), who are on a first-name basis with everyone, that's part of it. We start with the house brewery Im Goldenen Kessel. on Bolkerstraße. The popular refuge of Düsseldorf's art of brewing offers various rooms under rustic beams, rustic furniture, large barrels of barley juice and Köbesse with wit and repartee. Our second stop is the city's quaintest brewery Zum Uerige, where beer was brewed 250 years ago. Here the cleaning lady drinks with the general manager, the punk with the civil servant. And already lures with quaffable Alt the Füchschen". The fox-red beer is already brewed in the 5th generation in the old town. Under the motto Before the Alt is everyone the same pulsates in the rustic guest rooms Düsseldorf life. Shortly it goes still in the new brewery Kürzer. Here, tradition is cultivated in a contemporary way, with a lot of cosiness and plenty of charisma. While watching the brewmaster at work and enjoying the new Alt. Finally, it's off to the Gatzweiler Schlüssel home brewery, where the home-brewed barley juice competes with typical Rhenish cuisine for the starring role. Here, the name of the game is to grab a bite to eat. The crispy knuckle of pork, the classic sauerbraten with raisin sauce, the sumptuous butcher's platter - everything tastes just like it did at home.

1 Small beer snack for the road

Exclusive
Arrival, other drinks, food off the menu

Ages 18 and up, comfortable shoes, tour is for 12 or more people. 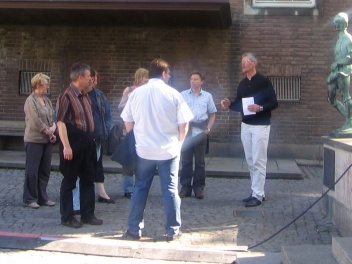