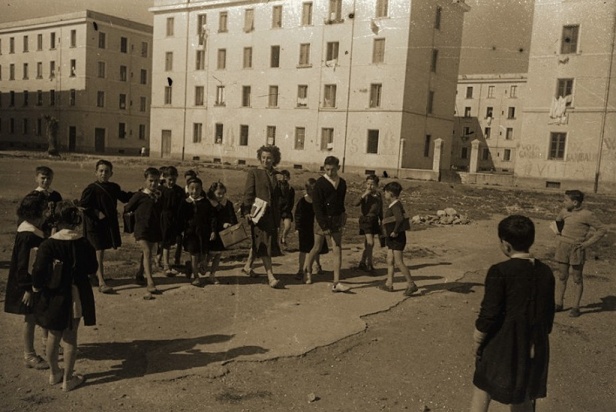 3.5 hours in the footsteps of Lila and Lenù (Elena Ferrante's novel heroines): from "Rione" to "Piazza dei Martiri" via the city center with the colorful market street "Pignasecca", the traditional shopping promenade "Toledo" and the town hall square, to the elegant one "Chiaja" district - the contradicting aspects of Naples.
--------------------------
The "Rione", a difficult working-class district in the east of Naples, where the two heroines of the novel grew up, is still there, with its unadorned apartment blocks. It still looks like a closed village, with its definite border: a black tunnel that may not look as long and dark as the eyes of two little girls who walk through it hand in hand for the first time. There are still cellar holes in the courtyards of the blocks that dolls swallow and appear like gates to a gruesome underworld. Maybe they still scare the children today ... everyone has their “Don Achille”.Throwing down the two dolls is the beginning of a series of tests of courage that accompany the children as they grow. Lenuccia's doll is only found at the end of the fourth novel in the cycle, 60 years after it disappeared ... and something has changed since then.The Stradone is now constantly full of cars, the wasteland has been built in and the Solara Bar ... can no longer be found. Of the many small shops in the Rione, you can still find Enzo's three-wheeled Ape-Car loaded with fruit and vegetables.The lending library of Maestro Ferraro can be found: a small community library at a dilapidated cinema, but which is always of great importance as a means of self-determination.And the town hall square (piazza Municipio, where Elena's father works as a porter for the city administration and starts his tour with Elena) is still a hinge between the world of the poor and the areas of the affluent, “where, as is well known, the rich and beautiful frequented ”. In a few minutes from the town hall square you can reach the elegant Caffè Gambrinus, the via Chiaja, with the many boutiques and the hidden men's haute couture shops, and finally the Piazza dei Martiri, where the Solara shoe shop was.Even today, Naples presents itself as a city of contrasts ... and a mirror of the world.

Exclusive
Transport costs not included.The tour is carried out partly on foot and partly by subway or taxi (depending on your preference).