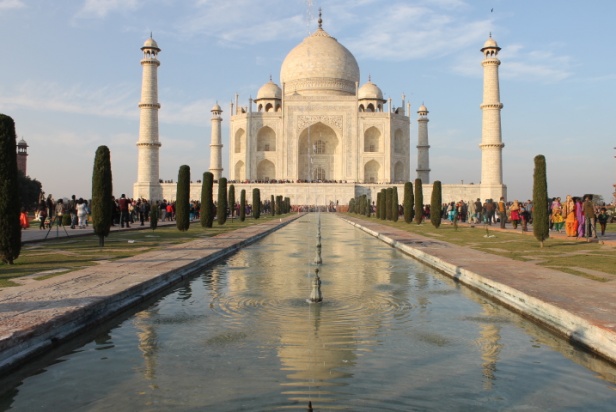 After a pick-up from your Delhi City hotel, you will head out on your private tour of Agra. It will take approximately 4 hours and 30 minutes to get there in your car.

En-route, you will visit the Lord Krishna Temple, Mathura, which is the birth place of the Hindu religion's Lord Krishna. Spend approximately 30 to 40 minutes there and then get back in your car for the rest of the journey to Agra.

Your first stop in Agra is at Sikandra, the mausoleum of Akbar. Akbar himself started construction of this beautiful monument. This structure has a perfect blend of Hindu, Christian, Islamic, Buddhist, Jain themes. Sikandra is named after Sikandar lodi, the Delhi ruler who was in power from 1488 to 1517.

After spending an hour there you will proceed to your Agra hotel where you will spend the night. After checking in, you will have lunch (own expense) then you will start your sightseeing tour again.

You will head to visit the Taj Mahal, a building which was built by Emperor Shah Jahan as a Mausoleum for his second wife, Mumtaz Mahal, who died in childbirth in 1631. The Taj-Mahal, India’s most iconic building and a UNESCO World Heritage site is a white marble mausoleum located on the southern bank of Yamuna River. The architecture of the Taj Mahal is a combination of Persian, Turkish and Indian architecture.

After spending an hour at the Taj Mahal you will proceed to visit another UNESCO world heritage site, Agra Fort. Agra Fort is a treasure house of Mughal architecture and is a symbol of power, strength and resilience. After you visit the Agra Fort, you will return to your car and the chauffer will take you to your hotel where you can relax for the night.

Overnight stay in Hotel Crystal Inn or in similar class of hotel in Agra.

Day 2:   Agra - Fatehpur sikri - Delhi
After your breakfast at the hotel, the chauffeur will meet you in the hotel lobby and you will be driven to Fatehpur Sikri. It will take approximately 1 hours and 30 minutes to drive to Fatehpur Sikri. Fatehpur Sikri is famous as a magnificent fortified ghost city and was the capital of the Mughal Empire between 1571 and 1585 during the reign of Emperor Akbar.

After spending an hour there you will be driven back to Agra where you can visit the Itmad-ud-Daulah, another amazing piece of Mughal architecture. The Itmad-ud-Daulah is often regarded as a draft of the Taj Mahal and has a special place in the chronicles of both history and architecture because it was the very first tomb in India which was entirely made out of Marble.

After visiting the monument you will have lunch (own expense). After lunch, you will be driven back to Delhi and dropped off at your Delhi city hotel.